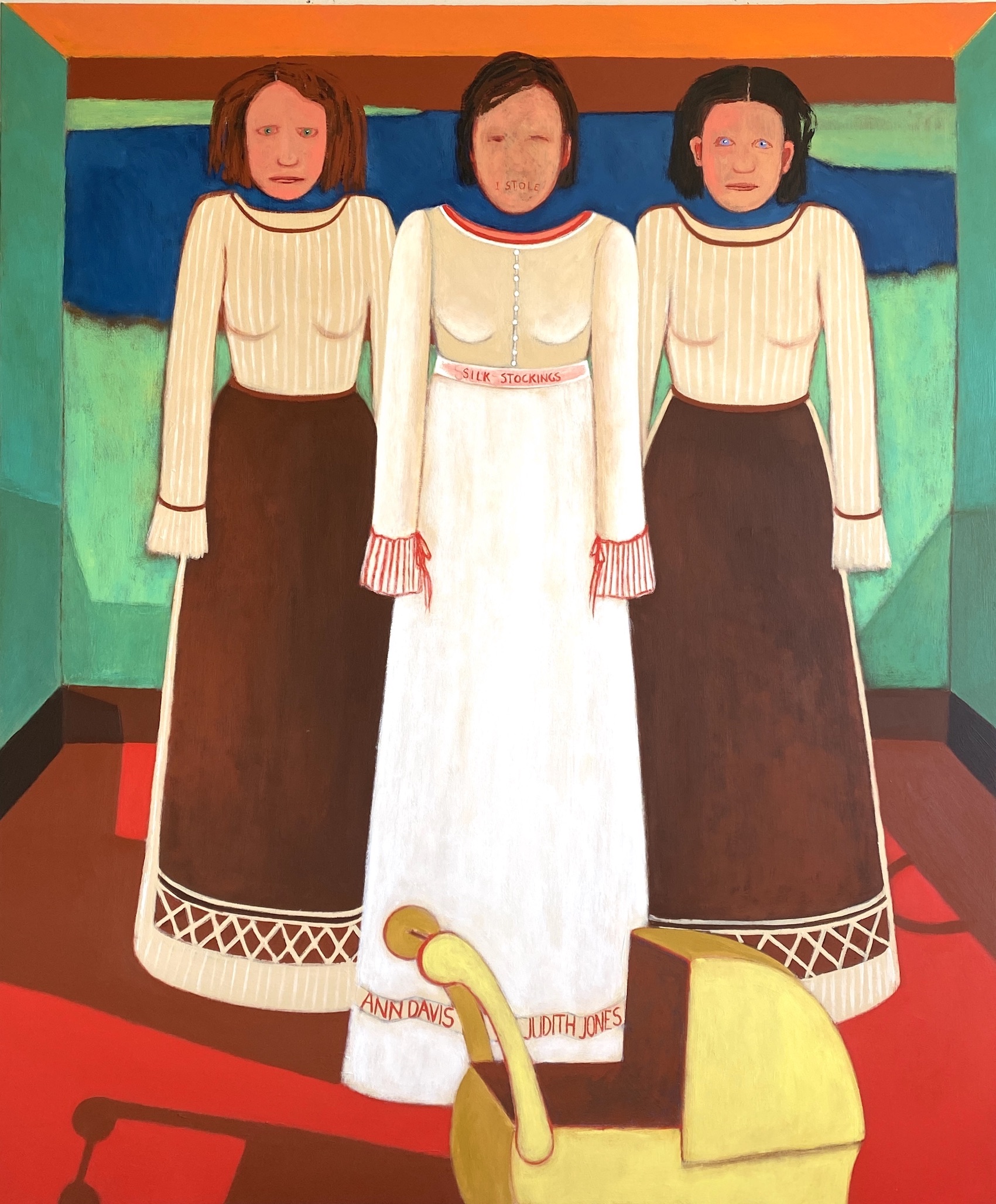 Without a shadow of doubt – The art of Susan O’Doherty

The most striking thing one encounters when viewing Susan O’Doherty’s new body of work Walking the Plank Without a Shadow is a collision of experiences. While processing the immediate beauty and richness of the imagery in her narrative paintings there is also a palpable sense of trauma and toughness along with a growing apprehension that deeper, more sinister events are at play. This becomes immediately apparent in O’Doherty’s arresting mixed media sculptural works, figurative pieces based on women’s lives and experiences in colonial Australia. About three years ago Susan discovered links within her ancestry to Australia’s convict past and this ignited a new line of enquiry in her work. With his brother William, Susan’s great-great-grandfather James Austin was sentenced to death in England for larceny. This was commuted to life imprisonment and the brothers were transported from England to Van Diemen’s Land in 1832. James eventually married a free settler, Sarah Bray and they had 11 children. Susan’s great-grandmotherEva was a year old when James died in 1873. We know as a society that an understanding and acknowledgment of the past, understanding who we are and where we come from is so critical to developing our own sense of identity and imaginings of what our futures might hold. Australia today is still grappling with the cataclysmic ramifications of colonisation especially the irrevocable damage for our First Nations peoples, in the endorsed decimation of populations, culture and way of life unleashed by British colonisation. Exploring the territory of Susan’s own family convict history was the artist’s starting point, but the work she has created speaks to the universal experiences of the underclasses of women in these times. Her works explore the brutality of the British system including the systematic abuse of First Nations women as well as white convict and white settler women. O’Doherty’s is an uncompromising approach that speaks to the soft underbelly of our nation’s history, of historic violence against women and the reality of these experiences, still playing out through inter-generational trauma today. Despite the shocking imagery and subject matter, the unapologetic femininity of O’Doherty’s artworks, their warm rich palettes, the tenderness of their materiality and construction is alluring and invites close inspection. The works are charming and severe in equal measures but along with the wretchedness of their context, the counterpoint is a celebration of soft power, of women’s femininity, of resilience and of ‘women’s arts’. This is evident in the stunning piece The Ties that Bind- After the Rajah Quilt (2021) drawing inspiration from the history of The Rajah Quilt, one of Australia’s most important pieces of textiles now in the collection of the National Gallery of Australia. The Rajah Quilt was created on board the HMS Rajah during its passage from England to Van Diemen’s land, a journey that took 6 months on the ship carrying 180 convict women who were essentially sent to Australia as breeding stock for the colony’s survival. Enduring the harsh conditions on the Rajah the women banded together to make a quilt from fabric scraps and threads gifted by the benevolent social reformer Elizabeth Fry. O’Doherty’s imaginative response reflects on these extraordinary women who created a work of art about hope, whilst living in the most abject circumstances. The large painting Where Are You? (2019) speaks to the cruelty of the many female factories where systems of forced adoptions were wreaked upon young vulnerable women. O’Doherty’s use of repetition and patterning in her tessellated designs and pram image serve as a sickening reminder of these practices which took place all over Australia and have had such devastating effects. Equally the sculptural works For Insolence (2019), For Pregnancy (2019), For Lice (2020) and For Drunkenness (2020) are shocking for their portrayal of institutionalised violence against women, conveyed by the artist in her minimal use of red woollen thread and found scrap metal pieces. They serve us a powerful observation about domestic violence and coercive control in contemporary Australia. Walking the Plank Without a Shadow is an apt title for an exhibition exploring the erasure of women’s experiences from history with a strong commentary about our contemporary times. The title relates to the expression ‘beyond a shadow of a doubt’, a phrase originating in England during the 18th century, most commonly attached to the judicial system. The title relates also by extension to the phrase ‘a shadow of her former self’, used to indicate a person reduced in power, substance and status. O’Doherty’s artwork interrogates these notions and questions ‘what is it to exist without a shadow?’ and ‘what is it to be without power?’ Her compelling body of works exist as a pointer to our own reckoning with Australia’s past and our future and make an empathetic statement of solidarity with these discarded women. In the beauty and terror of O’Doherty’s artworks, these womens’ lives, real or imagined, are remembered and they matter.