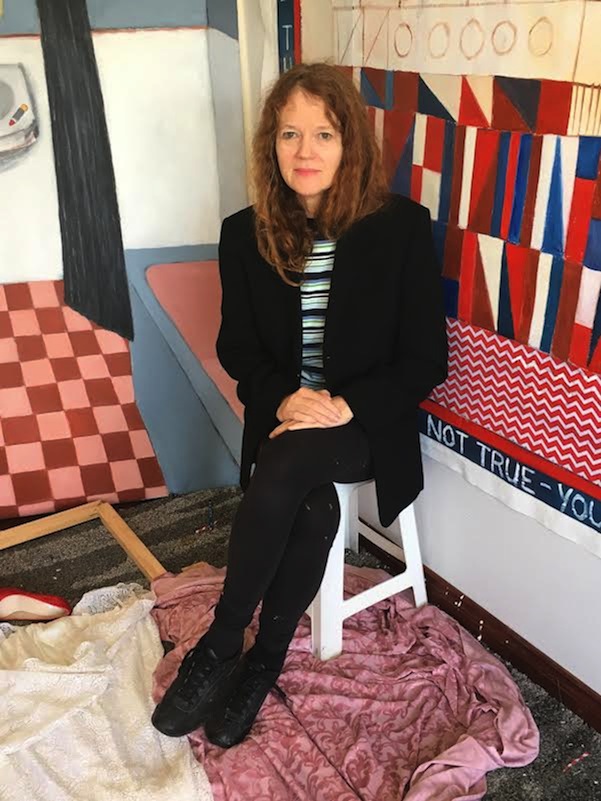 Susan O’Doherty was born in Brisbane, Queensland, the third of four children. Her father was an officer in the Australian Army, which meant the family were constantly on the move, interstate and overseas.  After completing school in Sydney, Susan trained as a make-up and prosthetics artist and worked in theatre and film where her interest in the visual arts took hold.

Learning to paint as a young mother of two children, her work evolved and developed and she began constructing mixed media assemblages and sculptures incorporating a wide range of familiar found objects: furniture parts, kitchen implements, glass, china, metal, wood, plastic, textiles and ceramics set within wood framed boxes, composed to convey harmony, dissonance or something intangible in between. Her painting continued in tandem, complementing the assemblages – both mediums have repeated painted patterns denoting the repetition of time, with overlapping themes and subjects focusing both on motherhood and domestic identity and on political, gender, social and environmental issues.

O’Doherty has exhibited widely throughout Australia with work relating to these themes.  A recent body of work ‘Pinned to the Wall’, looking at sexual politics, domestic violence and consumerism was exhibited at the Lost Ones Gallery Ballarat, Spot81 Sydney and Coffs Harbour Regional Gallery in 2016/17 .

Susan O’Doherty’s exhibition of 450 painted portraits of visual arts practitioners ‘900 Eyes, Domestic Lives’ was exhibited in 2008-9 at Manly, Tweed River and Maitland regional galleries.  In 2009 she participated in Macquarie University Gallery’s ‘Reimag(in)ing SomaSex’ and in ‘Diarama’ at Wollongong Art Gallery in 2013.

Marking the centenary of the Anzac Gallipoli landing, Susan participated in 2015-16 in commemorative exhibitions ‘Contemporary Gallipoli’, ‘Your Friend the Enemy’ and ‘Wept, Wait and Be Worthy’ at Macquarie University Gallery, S.H. Ervin Gallery and regional galleries in Bathurst, Goulburn, Cowra, Hawkesbury and Grafton.

In late 2017 she completed a two month residency at NG Art Creative Residency in Eygalieres, Provence France where she exhibited a series of paintings for the studio exhibition ‘Hunting Season’.