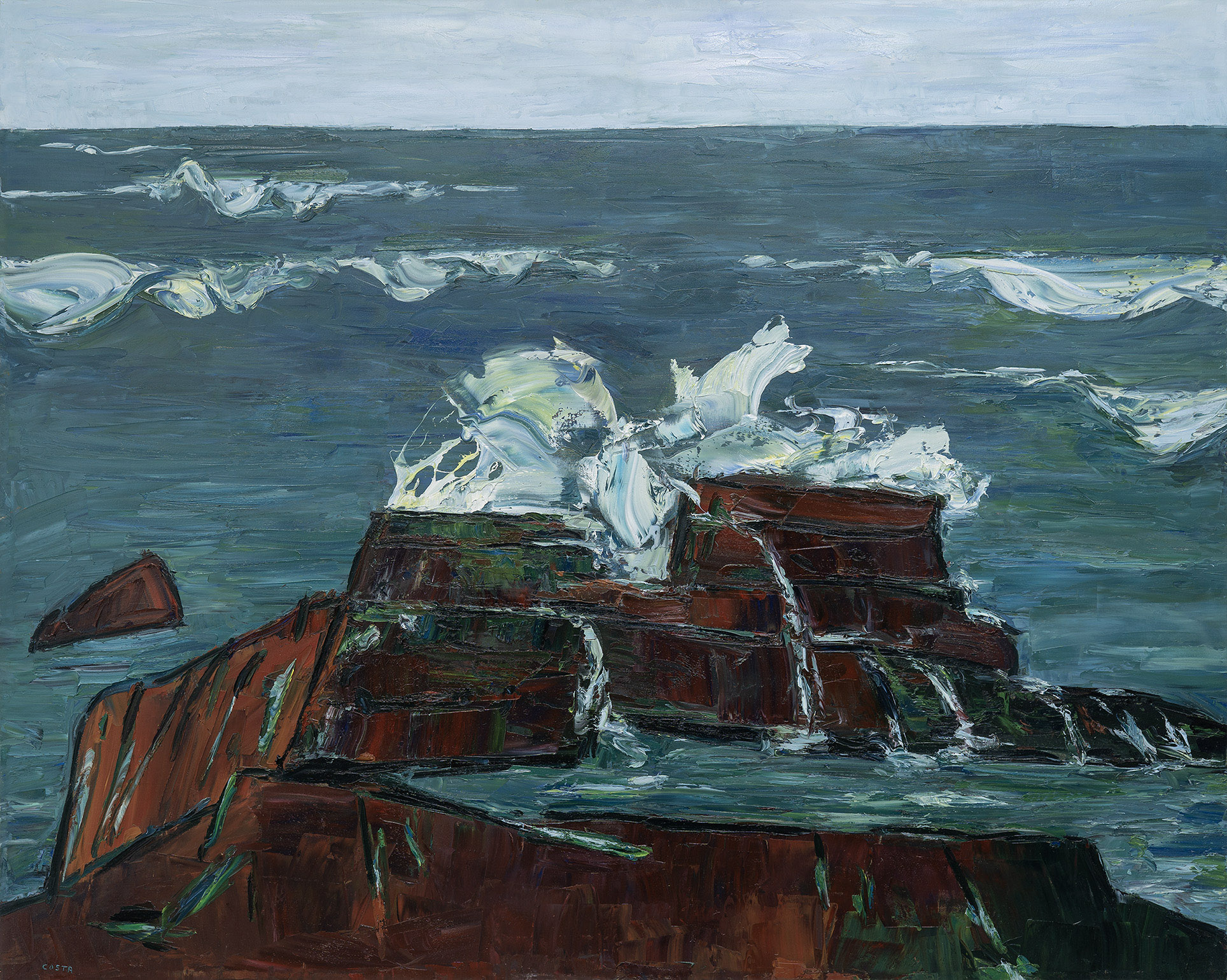 When you cast your eye across Tony Costa’s paintings a few things become apparent almost immediately; one is the restricted colour palette, another is the graphic quality of the images, and the third is the complete absence of evident brushstrokes.

Costa’s work is marked by a subtle and unassuming approach to image making, a practice that’s engaged with the classic subjects of painting, both in his celebrated portraits, such as his 2019 Archibald Portrait Prize winning portrait of artist Lindy Lee, and the landscapes which form the basis of this exhibition. And while there is a familiarity to these subjects and media, his approach to them is both singular and idiosyncratic.

Costa has been working for the past several years developing a series of landscapes inspired by his visits to the coastline that runs along the eastern edge of the Royal National Park, south of Sydney, and the beaches at Little Garie and Wattamolla. Feeling energised in the presence of the sea, and the towering bluffs and escarpments, Costa began a series of works that set out to capture the essence of the place.

Attracted by the forms of the beach shacks at Little Garie – ad hoc buildings that had been built as shelters in the first part of the 20th century and still stand today – Costa was drawn by both their ordinariness and their modesty, and the formal challenge they presented in capturing them, along with the sometimes dramatic land and seascapes of the region.

To start his project, Costa began a series of charcoal drawings en plein air, producing as many as a dozen a day, before moving back to his home studio in Sydney, where he used his studies to inspire his works on canvas.

Costa is an intuitive painter who works in a unique way. Using an old height-adjustable hospital bed as a support surface for his canvas, he paints as if working on a table, looking down, applying oil paint with palette knives to produce a background over which he lays down more paint. But instead of brushes, Costa uses his fingers to shape and move the paint around the surface, approaching all sides of the canvas at once, slowly working his colour into the recognisable form of a subject.

It is an intense process that arises in part from Costa’s desire to produce a work of art that not only responds to the external reality of a place, but one that is also in tune with its spirit. The artist is largely disinterested in what he terms ‘external reality’ and is instead interested in trapping ‘energies’ that can only be discovered through the focused process of looking and painting. Costa’s desire is to go beyond the literal surface, and to achieve something more.

The use of a restricted palette, predominantly green, yellow, and black, with a splash of red in the images of native flowers, creates within these works an unusual sense of estrangement. While the form and subjects are familiar, the colour treatment produces an intriguing conflict between what is depicted and how it has been achieved.

Another of Costa’s techniques is the use of the black line: it’s what gives his works their very distinctive and literal graphic edge. We see them here defining the forms of rock, water, tree and sky. Using a black line is also a declaration of intent, the artist setting out a limitation between things, a form given its form totally separate to everything else in the image world of the artist’s body of work. The black line is the thread that connects the artist’s portraits to his landscapes, and visually summarises the subject of each work while creating a visual tension that sends the viewer’s gaze once more around the picture.

Costa confesses to entering a meditative state while in the process of creating. He intentionally produces chaos on the canvas then carefully works his way out of it, concentrating on the rhythms of the picture, on composition and subject. The thing evolves, he says, until it is complete, a state that can only ever be reached via the process itself.

What the artist has set out to achieve is a metaphysical communion between subject and execution and, as we can see across the full range of the works here, there is a continuity of both vision and treatment.

All external reality is ultimately subjective. Our senses, reason and feelings are subject to any number of internal processes that are as ultimately unknowable to us as the strangeness of the outside world.

Our internal worlds make perfect sense to us, but when we set out to explain them in detail to others, it becomes a lot more complicated. Through art, we have the rare opportunity to see the world as someone else sees it, but perhaps more importantly, as they feel it.

Tony Costa provides us with an opportunity to experience the world as it is experienced by a sensibility finally attuned to the energy of things.