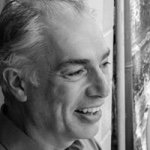 Paul Connor is a Sydney based Artist and Architect who has been involved in many cultural institutions including founding Director of the NSW Parliament Plein Air Painting Prize and he is a current Trustee of The Australian Museum. He has had many well published and awarded housing projects built throughout Sydney, and has had numerous solo exhibitions with his artwork held in many private and public collections. His work is almost exclusively made outdoors including his collages, digital drawings and drawing movies.

Having graduated with honours in architecture at Sydney University he was offered a place in the Masters course ay Columbia University, NYC and Pennsylvania State Universities. He instead elected to complete a Masters Degree in Research with First Class Honours at the University of New South Wales, College of Fine Art for en plein air work made in the deserts of far western NSW. Paul Connor was a finalist in the Korea-Australia Arts Foundation Art Prize in 2017 and a semi-finalist in the Doug Moran National Portrait Prize in 2017.  He had also been selected in the SH Erwin Salon des Refuses and his work is in the collection of Art Bank,  Maitland Regional Gallery, Tamworth City Gallery, Logan City Art Gallery, Margaret Olley Foundation, University of Sydney, Cranbrook School and various corporate and public institution collections. Paul Connor will be exhibiting with Art Atrium in Art Central Hong Kong in 2018.

Connor regular visits Paris with his family to paint and draw. Other favoured locations are the central tablelands and southern coast of eastern Australia, and Sydney’s Port Jackson.