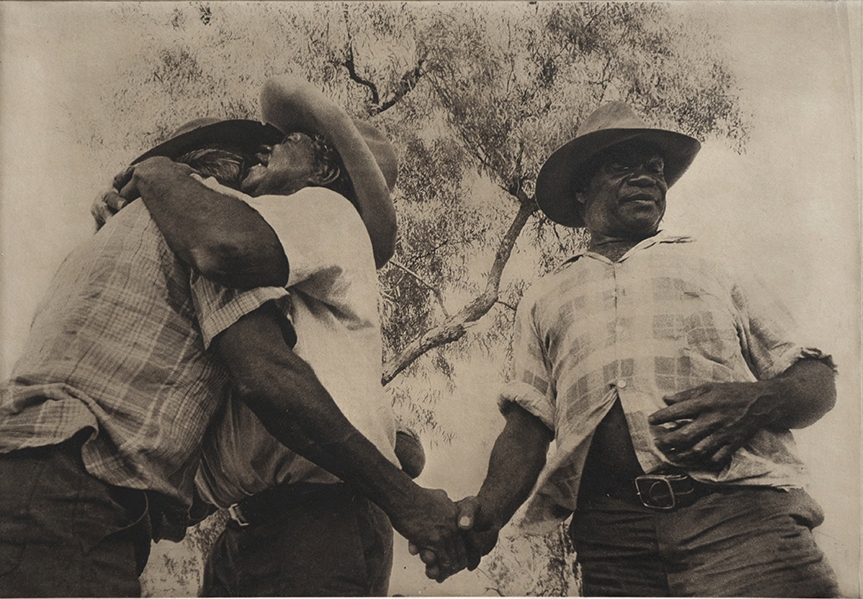 Exhibition opening with the Artists

to be launched by

Winner of the inaugural $50,000 Don Macfarlane prize in 2017 for her “breathtaking conceptual work and ongoing cultural contribution”, Pat Brassington is one of Australia’s most highly respected and influential artists working in photo-media. Through her ongoing practise, informed by Surrealism, Brassington’s work delves into the uncanny and the provactive effect ambiguity has on interpretation. In her work the endless possibilities of our complex inner states – narratives of sex, memory and identity – run quietly rampant, an arresting beauty underscoring superbly loaded connotations.

Adam Douglas Hill (Blak Douglas) was born in Blacktown (1970), Western Sydney to a Koori Father and Caucasian Mother. Originally trained in illustration & photography, observing a family of artisans, he became self-practiced in painting with a style influenced by the study of Graphic Design & devoutly politicised in relation to social justice.

Scarred#1 2018 depicts a road trip escorting an Uncle from the Darlington Point community. He remarked on just how many Eucalyptus trees he could spot from the roadway as he drove parallel to the Murrimbidgee River.

” I enhanced the existing tree by adding the face of an elder within the very scar created by hand.

I wished to create a historic photographic image celebration the beauty and the richness of the culture who’d consecutively acquired shields and other weaponry form various species of Eucalyptus. This piece distinctly and romantically captures the very notion that ‘something is watching us’ in the bush.”

Juno Gemes is one of Australia’s most celebrated contemporary photographers.  In words and images she has spent 40 years documenting the changing social landscape of Australia, and in particular the lives and struggles of Aboriginal Australians, a process that culminaed in her being one of the ten photographers invited to document the National Apology in Canberra in 2008.

Her work is  focused on social justice and literary portraiture and comprises twenty-six solo exhibitions including  Proof: Portraits from the Movement, 1978–2003 at the National Portrait Gallery in Canberra . Her publications include The Language of Oysters (Craftsman House, 1997), a collaboration with her partner, Robert Adamson.  Appointed photgrapher in residence to the 2009 Sydney Writers Festival, these superb literary life images will be featured in an exhibition at Heritage Pier during the 2018 Sydney Writers Festival.   Gemes collaborated with the world renowned master printmaker Lotar Osterberg at his studio in New York in 2015.

“Working with Juno in my studio was a joy. She was excited to be able to work in the traditional dustgrain copperplate photogravure process as developed by Fox Talbot and refined Carl Kliç in the 19th century. She approached the proofing and printing with an open mind I rarely have experienced with photographer.

I went through my collection of papers – samples of rare Gampi and Kozo and I had on hand for proofing as well as leftovers and unique, old handmade papers that had been waiting in my flatfiles for years for a deserving project.  In Juno Gemes’ prints they found their perfect destiny”.

Her  acclaimed work “Spirit Maps” features  two iconic images  ‘Countrymen’ and ‘One with the Land’ will be on view at  the Diversity exhibition.  Created while working with the Woomera-Mornington Island Culture Collective 1978-1979 these images have a deep enduring cultural resonance for Gemes.

Iranian-born artist Nasim Nasr has emerged as one of the most distinctive voices of Australia’s contemporary art scene since she moved to Australia in 2009.

Nasim deals closely with themes of power, memory and rebirth as represented through the veiled figure. The paradox of the chador, being agent of both concealment and enticement, challenging both traditional mores and contemporary celebrations of the female form. Nasr boldly orchestrates a meeting of East and West that confounds cultural norms and puts notions of gender identity firmly into question.

Her provocative  performance work Women in Shadow was presented as part of the Sherman Centre for Culural Idea’s inaugural event SCCU Fashion Hub at the Power House Museum in April.

No prominent image-maker of recent times has chronicled avant-garde social circles so relentlessly as William Yang with such attention and so much energy in gauging his own responses to the sights and spectacles unfolding around him. Yang’s vantage point has always been where the view was best – at the forefront, in the thick of things. His 11 full length monologues have toured the world.

Yang is best known as a photographer of men and women, of faces, bodies and human social interactions yet “His carefully composed bush landscape images are the equal of any photos made in the Australian inland.” Nicolas Rothwell, The Australian.

“When I became Taoist (Taoism is a Chinese philosophy) I came to see nature in the form of landscape as the source and driving force of everything that existed. It was constantly changing and renewing itself. Everything about nature was beautiful because it was essentially always itself.” William Yang 2018. The Diversity exhibition will highlight some of these beautiful landscape and nature images such as Lorikeet, Boranup Karri Forest and The country near Bathurst.