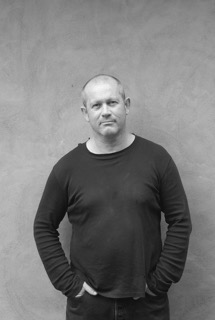 Simon Reece studied ceramics at The National Art School (formerly East Sydney Technical College), in 1980 for 3 years. Completing his studies, he set up a studio in Blackheath, NSW, and taught ceramics at Nepean TAFE before travelling to Japan and working for ceramic master, Uneo Norihide in Bizen in 1985, where he learned the art of wood firing ceramics and developing a strong sense of ceramic aesthetics. These skills and methodologies still dominate and inform his work practice.

Returning to Australia, Simon became a journeyman potter building wood kilns and firing work with other ceramic artists, building on the skills he had learnt in Japan. In 1997, Simon set up another studio in Blackheath, NSW.

Constantly adapting and always working with different clays and developing glazes from raw materials, Simon has worked creating tableware for some of Australia’s acclaimed chefs and restaurants, including Tetsuya, Justin North (The Centennial and formerly Becasse), Neil Perry’s Rockpool, Sean Presland of Sake Restaurant, George Calombaris’ Press Club along with small boutique restaurants. Always diversifying and exploring, he has made large-scale environmental sculptures for private commissions and public works. In 2011, Simon and his family travelled to Ernabella, SA, where with renowned wood-fire potter, Kirk Winter, they taught Wati workshops with the Anangu men at the historical Ernabella Art Centre. Following time spent at Ernabella, Simon travelled to Barcelona, Valencia, Granada, Cordoba and Madrid on a three-month study and research tour making contact with Spanish master potters and ceramic artists including Enric Mestre, Juan Orti, Miriam Jiménez Huertas, Antonio Vivas (publisher of Ceramica Revisita), Esperanza Romero, Augustíne Ruizde. Returning to Japan in 2014, Simon travelled with Merran Esson (Head of Ceramics, NAS) and Malcolm Greenwood (master potter) to Shigaraki where they conducted workshops and lectures at the Shigaraki Ceramic Cultural Park. He was one of the Master ceramicists at CLAYarc Gulgong in April 2016.