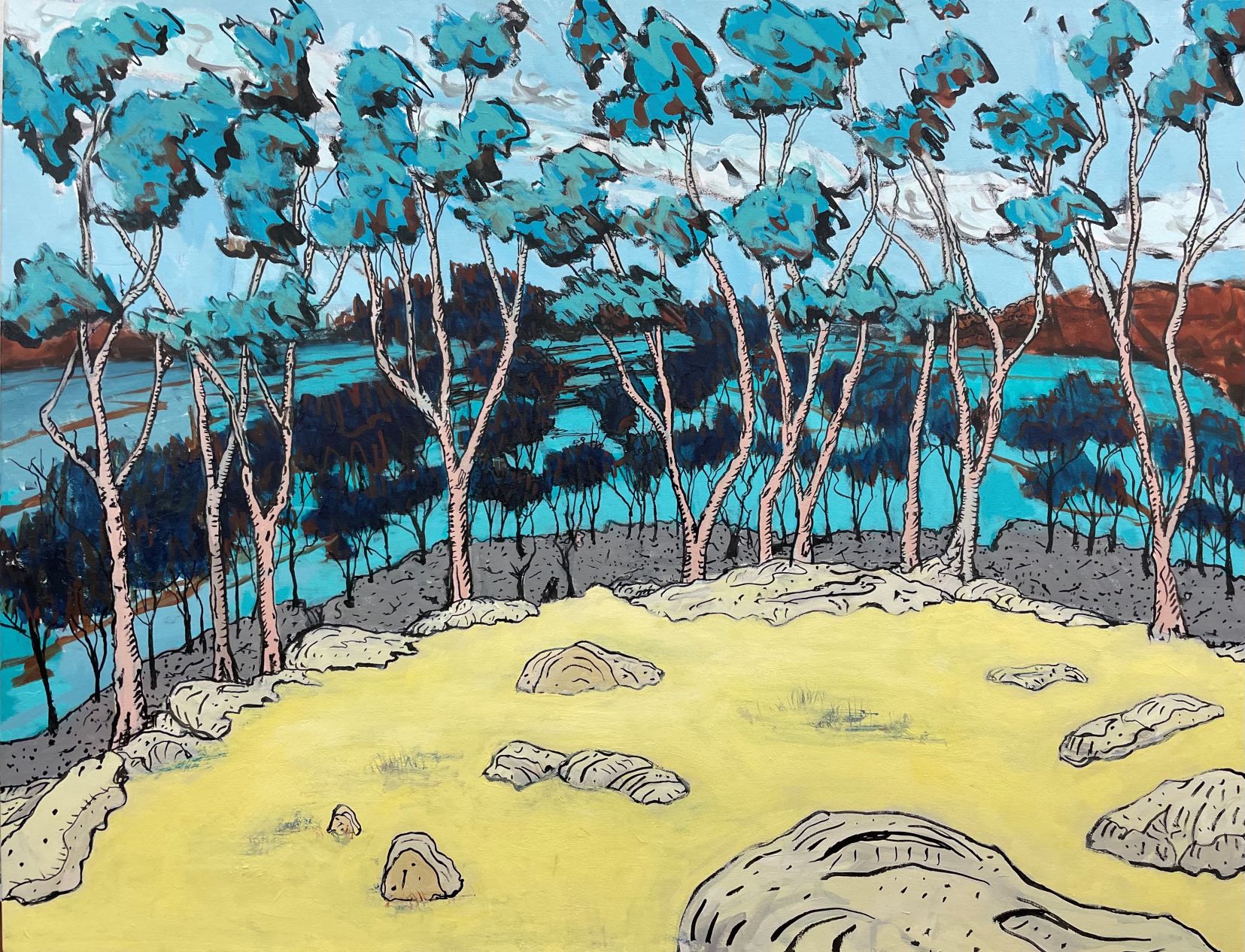 It says a lot about the temper of our times that the word “protest” carries so many negative connotations. When Paul Connor calls his landscapes “protest paintings” one immediately thinks of angry demonstrators chanting and waving banners. Or perhaps, in an environmental context, public outrage about the destruction of forests or the opening of new mines.

There may be a trace of eco-anger in Connor’s landscapes but he is quick to remind us that a protest was originally an assertion, a forceful declaration of a claim or point of view. History is full of people protesting their innocence – which doesn’t mean they went rampaging into the streets. When Gertrude says: “the lady doth protest too much, methinks”, she wasn’t suggesting that Hamlet’s chosen play had too much political activism, rather that the actor’s protestations of marital love and fidelity were so exaggerated as to sound insincere.

Connor protests that a suburban landscapist who finds his subjects close to home may love the natural world just as much as one who craves new sensations. He is not proclaiming a high Romantic passion for the wilderness, the mountains or the sea. He’s not trying to alert us to any deep, ancestral connection to his birth place. The artist’s “protest” is a profession of faith in landscape painting – a conviction that even the most familiar scenes can be rewarding. When Connor does travel out of Sydney it’s usually to a favourite spot on the South Coast, where he and his family have been holidaying for years.

In this show the exception to the rule are those gouaches painted en plein air in the MacDonnell Ranges, which are much freer than the Sydney pictures. In the Outback Connor’s first impulse has been to capture his impressions quickly and spontaneously. His forms are loose and schematic. Trees and clouds, grass and shrubs have been added with wristy flicks of the brush.

The MacDonnell Ranges paintings are almost antithetical in style to the more deliberate ink-and-acrylic works made in the vicinity of Sydney Harbour. Connor returns time and again to locations where rocky outcrops and pockets of bushland are sandwiched between the ocean and the manmade environment. Occasional signs of human handiwork are incorporated: a tarred road in Callan Park, storage tanks and moorings at Gore Cove, the tiny silhouettes of distant buildings seen from North Head.

The most striking aspect of these views is the crisp use of line. Connor has taken his time, allowing invention to influence simple observation. He may even be incorporating memories of other artworks. In Garungal (North Head) Cliff Face, the rocks piled one on top of another are reminiscent of Philip Guston’s painting, The Pit (1976), which features piles of shoes stacked sole-upwards. One presumes the association is only skin-deep as Guston’s painting is a vision of the Inferno while Connor gives us a vista of the ocean on a clear day, framed by worn and battered rocks.

After an artist has studied a particular location for a long time it starts to reveal another character that lies beneath the skin of appearances. Cézanne stared at Mont Sainte-Victoire so often, from so many different angles, that what began as a feature of the landscape became a vehicle that allowed him to explore the very limits of representation.

Connor’s ambitions are clearly not on the same scale as Cézanne’s but one can see how returning to paint in the same, familiar places has allowed him to develop a new way of seeing the landscape. There’s a simplication of forms and an obvious pleasure in the use of bright, not-quite-naturalistic color.

By drawing the features of a scene in ink Connor swims against the main tide of Australian landscape, which takes its inspiration from the home-grown Impressionism of artists such as Tom Roberts and Arthur Streeton. Nevetheless, to put Connor’s work alongside one of Streeton’s classic views of Sydney Harbour, or perhaps Roberts’s Mosman’s Bay (1894), is to be struck by a family resemblance that transcends stylistic differences. Whether dull or dazzling, mere surface appearances work best when we are looking at depictions of exotic lands. With those places we know well what’s most important for any landscape is to convey a sense of its own special, underlying truth.