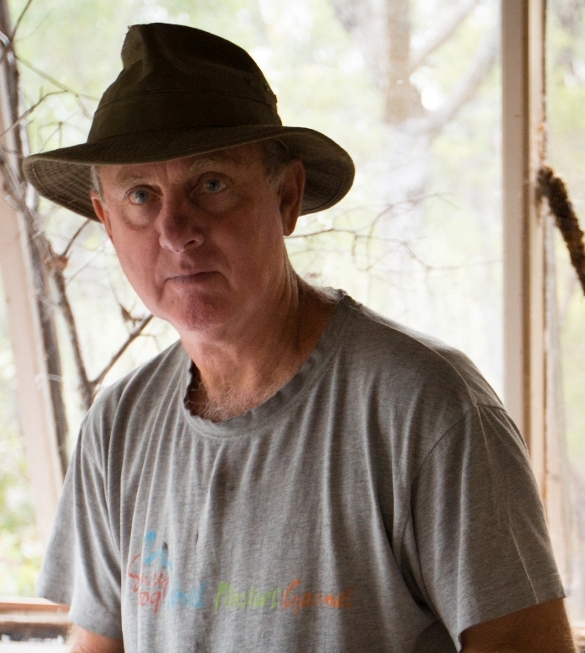 Patrick Shirvington’s work investigates his relationship to the natural world through drawing, believing the practice of drawing is fundamental to the cognitive process and to opening doors to the unseen.

‘I don’t look for practical realities, but rather allow the unseen to present itself spatially, displaying its own authenticity as a poignant delineated form. Then and only then …can it be seen in light of reality.

We tend to look at the object, however, do we see the subject?

Are we truly conscious of all that is around us as separate entities that come together to become one? Awareness of our environs involves cognition, in other words, seeing and taking notice of the things that are around us.

I tell my story with mythical symbols, whether from the brush on a large canvas to the more intimate illustrations in children’s books, I feel the unknown is more important than the known, as it awakens our dreams and intuition.

Through our dreams we delve deeper than the mere surface.

My artmaking looks at the natural world surrounding us, firstly bringing our attention to the picture surface, followed by a deeper revelation.’

Patrick Shirvington is an accomplished children’s book illustrator,. He has a Master of Cross Disciplinary Art and Design UNSW MCDArtDes. His picture book, Can You find Me ?, written by Dr Gordon Winch, was shortlisted for the Wilderness Society Environment Award for Picture Books (Australia), a CBCA Notable book, with Patrick being nominated for the Crichton award for illustration. Patrick’s books have now been published worldwide, including translation into Chinese. With his fifth book being released later this year, Patrick has included a selection of prints from his previous books in this exhibition.

Patrick Shirvington started his journey as an artist in 1975, when he began painting full time. In the following two years, he travelled through Europe and USA and participated in drawing class at the Academie de la Grande Chaumiere, Paris.  He completed his Masters of Cross Disciplinary Art & Design at University of NSW in 2015.  Patrick Shirvington  has been a finalist in the Adelaide Perry Prize for Drawing in 2011, 2012, 2019, 2020 Kedumba Drawing Award in 2003, 2006 & 2009, Paddington Art Prize 2018. NSW Parliament Plein Air Prize KAAF 2017, 2019 and he was also a finalist in the Archibald Prize at the Art Gallery of NSW in 1999 as well as numerous other art prizes. His work is in the collection of Edogowa Museum, Osaka, Japan, Kedumba Drawing Collection, Hawkesbury Regional Gallery, Macquarie University, Arthur Boyd Bundanon Collection, Adelaide Perry Gallery Collection, Australian Stock Exchange as well as various corporate and private collection.

Congratulations to Art Atrium artists Tony Costa, Keith Fyfe and Patrick Shirvington for being Finalists at the Adelaide Perry Prize for Drawing judged by John Wolseley and the exhibition was launched by Dr. Maryanne Coutts