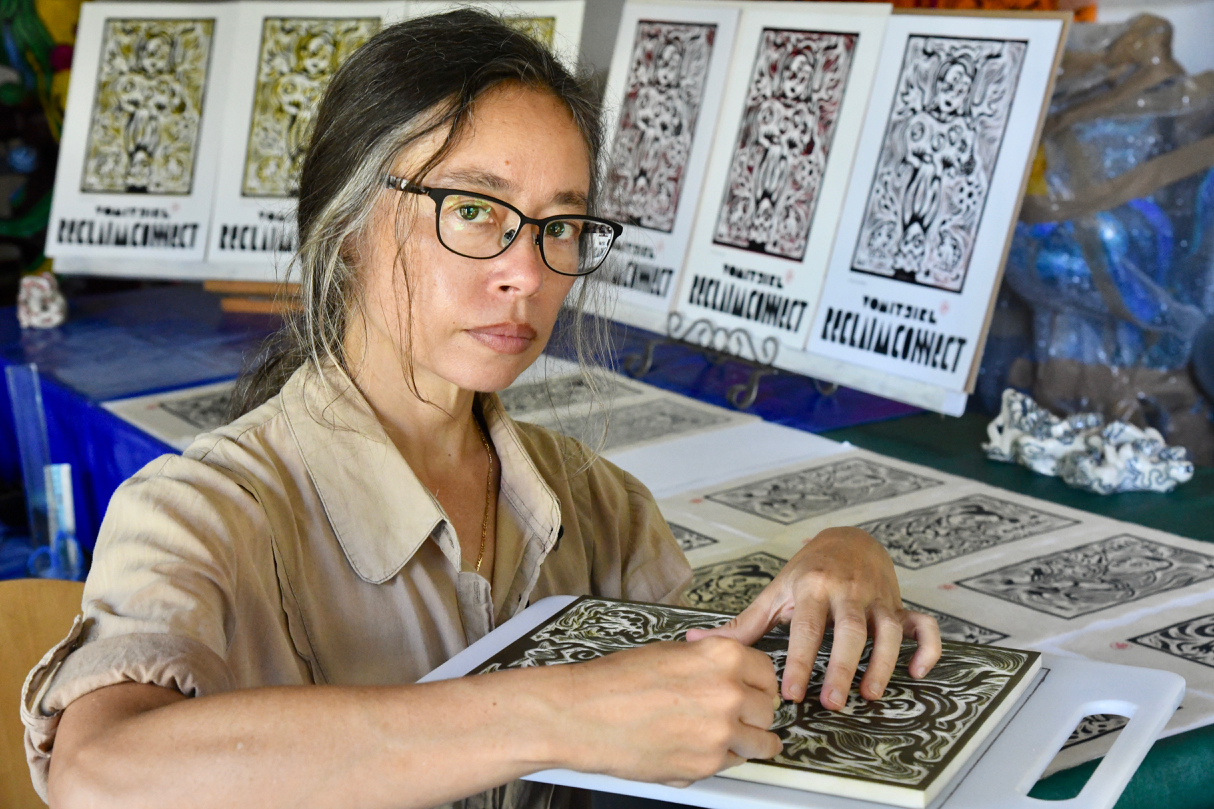 Mai’s first exhibitions were in Manila and Hanoi, with her first Australian solo at Bellas Gallery, Queensland (1996-98). While Mai briefly worked with installation and mixed media, notably Transit Lounge (Arrivals-Departures) (1996) at Australia Centre Gallery Manila, and E Chong: A Bilingual Installation with Incorrect Translations at Hanoi University of Fine Arts (1996), after returning to Sydney painting dominated her practice for the next ten years. Returning to installation in 2006 Mai adopted the mongrel dog as a metaphor for cultural exploration and her identity.  Drawn to papier-mache for its deceptive innocence and saluting Southeast Asian folk crafts, the cultural fracture expressed byPho Dog was further explored in her performance / installation piece, The Burning of Godog at Nam Bang!  for Casula Powerhouse Arts Centre (2009).

While the dog became a cultural trigger for Mai, and those reading her work, it also explores narratives that are extremely personal and self-reflective. This has been played out in Aqua Mutt: an Installation with Dag Girl at Victoria’s Incinerator Arts Complex (2007), Godog & the Ascension of Dag Girl (2008), True Blue Doggie Morph (2010), and Drift for Wollongong Art Gallery (2011). Mai’s drawings, often visual hybrids that float on the page,have also been a pivotal part of her practice. Searching for different forms of storytelling, Mai collaborated with William Yang’s Stories East and West (2010) presented by Performance 4A at Belvoir in Sydney, and theatres in Chatswood and Parramatta; and a collaborative curatorium project with Indonesian artist FX Harsono through 4A Centre for Contemporary Asian Art’s In Memory of a Name project (2012).

In 2014 Wollongong Art Gallery commissioned Mai to present a major solo show curated by international arts writer and curator Gina Fairley bridging over 15 years of practice.  Working across a range of different mediums, Beyogmos conceptually opened the body of Mai’s dog to explore constructs of identity, and the irreconcilable tension across layered and fractured realities. In 2015 Mai’s Beyogmos charcoal animation and digital projection Layered Transitions were re-exhibited at Mosman Art Gallery. Post Beyogmos, Mai has been spending extended periods of time in Hanoi, including a CICF Copyright Agency funded ceramics residency, and a Muong Studio Hoa Binh eco-art residency funded by ACCA Viet. In 2014 a compulsively vomiting figure began to appear in her work. Dubbed Vomit Girl, this mute space has inspired her current Doctor of Creative Arts (DCA) project, supported by the Australian Government Research Training Program (AGRTP) Scholarship. Born in Tasmania to a Vietnamese father and Australian mother, Mai spent her childhood and teens living in Papua New Guinea and the Philippines. Combined with other experiences, including extended periods of study and work in China, Taiwan, Fiji, and Vietnam this lineage has significantly impacted her art making as a continuing process of questioning.