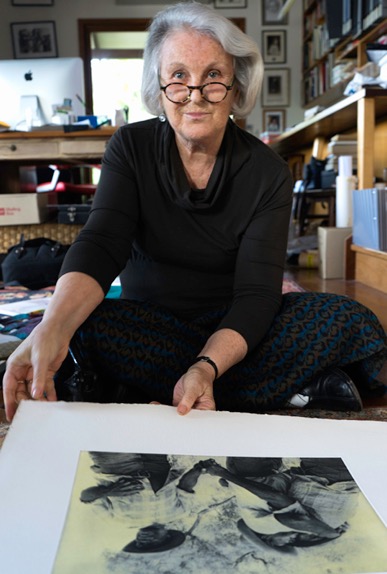 Juno Gemes is one of Australia’s important contemporary photographers. In words and images she has spent 40 years reflecting on our changing social landscape of Australia, creating positive affirming images of the lives and struggle for justice of Aboriginal Australians.  This process culminated in several major exhibitions and publications.

Born in Hungary, Juno Gemes, a NIDA Graduate came to photography from a  background  in multi media arts and film making during 1960’s in London, at The Festival  of Two  Worlds Spoleto, Italy. She was a founding Member of 10 Cunningham Street Artist’s Collective 1965  and The Yellow  House in Sydney 1970.

Juno Gemes is an activist  Movement  photographer who took up the  camera  to facilate communication across cultures made visible from within a collaborative personal cross cultural practice since the  1970’s  based on trust, friendship and respect. She has always collaborated with both Traditional  and Contemporary dancers in visual art works as well.

Gemes is also known  for  her portraiture and  photo essays which have been published in  The National Times, SMH , The Monthly , The Good Weekend, The Encyclopedia of Aboriginal Australia, Photofile, Look Contempoary Photography since 1980, Meanjin, Heat, Cordite, Poetry USA, The Times Literary Supplement  UK, The  Library of  Congress USA, European Photography Magazine, Visual Anthropology Review UK and The History of Photography Oxford UK.

Juno Gemes’ studies in  photography include attending a masterclass with Lisette Model “Incontra Personale” at Venice Biennale in 1979. She was also awarded a British Arts Council Grant in 1979 to attend The Oxford Photography Workshop with Aaron Siskind, David  Hurn  and  Brian Griffin.  In  1998 Gemes was  awarded  a Fellowship  from AIATSIS  to document  her  archive In Our Time Photographs and Texts  from the  Movement 1974 – 1994. In 2016 she attended a workshop with Luther Gerlash at The International  Centre for the Arts, Monti Castello de Vibio Italy concentrating on processes used in the first fifty years of photography.

Juno Gemes  has  had  20 solo  exhibitions in Sydney, London, Budapest, Paris  and at St  Louis University USA where during Evidence exhibition, she was The Kristin Peterson Speaker on Photography in 2015.

Between 1986 – 2010  Juno Gemes  &  her partner poet Robert  Adamson  were Co – Directors of  Paper Bark Press. In 1998 The Language of Oysters Poems by Robert Adamson , Photographs by Juno Gemes was published by Craftsman House. This acclaimed  publication was launched in London at Australia  House  by Robert Whitaker  and in Australia  at The  State  Library of  NSW  by David  Malouf.