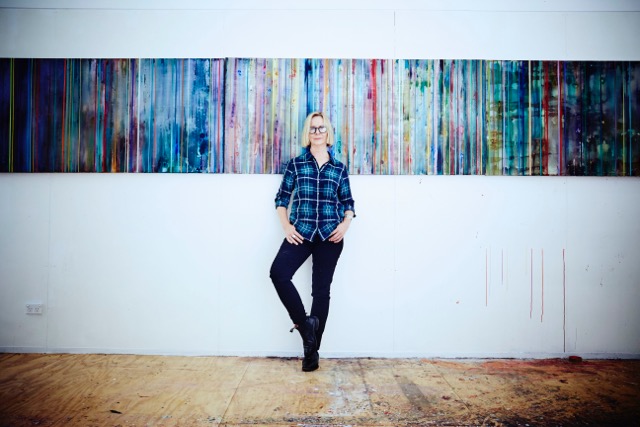 Julie Harris was born in Sydney and currently lives and works in Blackheath NSW. Harris studied at the National Art School, Sydney and at the Alexander Mackie College of Advanced Education, Sydney.  From 1976-1979 Harris continued her studies in restoration and water gilding with Bourlets (Sotheby’s) in London, UK

Harris has been exhibiting regularly in Sydney and interstate since the 80’s with numerous solo and group exhibitions. Harris received the Artlink Prize at the Mosman Gallery and a residency at Bundanon in 2002. A winner of the Adelaide Perry Drawing Prize in 2008, a survey exhibition curated by the Hawkesbury Regional Gallery toured some of Australia’s finest regional galleries between 2007-2009.  She has been a Wynne Prize finalist and her paintings have been exhibited in previous Salon des Refuses and Year in Art exhibitions at the SH Ervin Gallery. She was the recipient of the AGNSW studio at the Cite Internationale des Arts in Paris in 2009. She was the winner of the Fleurieu Landscape Prize in 2011 and artist in residence at Taronga Zoo. Harris was awarded the Kedumba Drawing Prize in 2014. In 2017 she exhibited ‘The Strip Suite” at the Blue Mountains City Gallery.

Harris exhibited with the Hughes gallery in Sydney until their closure in 2015  then with the Conny Dietzschold Gallery, Sydney . Harris currently shows with Art Atrium and Despard Gallery, Hobart, Tasmania

As an abstract artist Julie Harris is interested in the inventive freedom of painting. In addition and to facilitate this she is concerned with the process of making and the exploration of materials. Her painting process is very physical and like a continually evolving performance. The works are taken in and out of the studio according to the weather. The humidity and temperature actively influence the way in which the paint forms and mingles on the canvas and collaboration takes place outside of her control. She paints on her canvas horizontally and vertically.  She uses various methods of applying and removing the paint so the work is made and unmade.  The painting forms from the surface where a history of the activity and interactions remain and as the work takes on its own identity an internal logic is found.