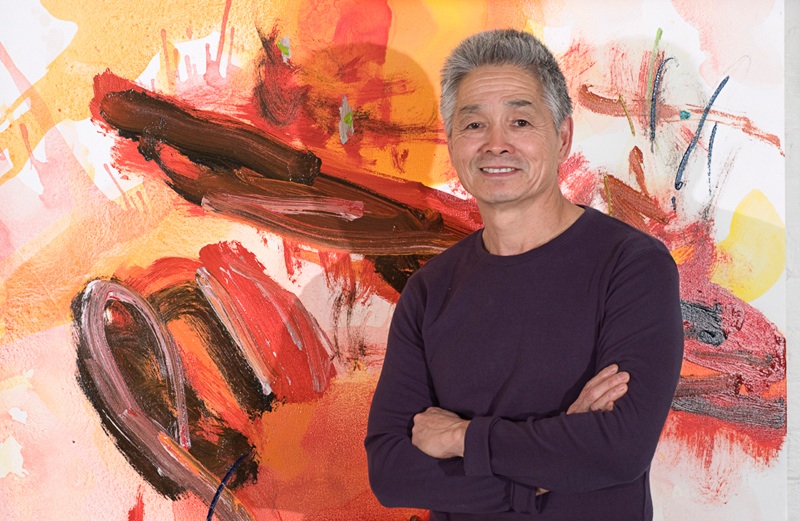 ‘My work has, for some time now, reflected a preoccupation with effecting an aesthetic reconciliation between a Western abstract sensibility with a uniquely Chinese form of calligraphic mark-making, through a visual language of gestural, lyrical abstraction, with colour and form assuming dominance over figuration or representation. Space is a critical aspect of my work with bold calligraphic brush marks, frequently in black but with traces of colour flickering within them, suspended within an ambiguous space created by the white of the primed canvas and contrasting with areas of chromatic brilliance in textures ranging from ephemeral cloudlike forms to densely applied raised areas.

This visual language is derived from two distinct cultural and aesthetic influences – the general stylistic language of 20th Century Abstract Expressionism and lyrical abstraction, and the Chinese Buddhist tradition of calligraphy. Although working in a Western medium my work draws heavily on the contemplative and instinctive mark-making of Chinese calligraphy with images which evolve and grow organically rather than to a preconceived or contrived plan.

My grandfather insisted that I practise my calligraphy daily even after moving to Australia – he encouraged me to write letters and cook and to maintain my Chinese culture. I always loved the feel of the calligraphy brushes – the tactile and gestural nature of making the characters. It is this gesture and feeling that I wish to express in my work. By eliminating the  context and abstracting the marks I am able to suggest text and communication without direct reference to words – if we are unable to read symbols they assume a purely visual nature and so Chinese calligraphy or Sanskrit assume an abstract quality to those who are unable to read it. I extend that notion by abstracting the calligraphic marks so that they are unreadable to all but universal in that they elicit a visual response devoid of  literal associations but remaining suggestive of them.’

Born in China, 1948, and resident in Australia since 1963. Graham Kuo attended the National Art School from 1968-72 (graduating Associate of Sydney Technical College). He was a full-time lecturer at Alexander Mackie College of Advanced Education from 1976-81, City Art Institute 1982-89 and the College of Fine Arts, University of New South Wales 1990-99 and a Senior Lecturer at College of Fine Arts, 2000-04. He has travelled widely throughout the USA, Europe and Asia.

Kuo’s work has been described as being located at an intersection of western art traditions and methods with eastern philosophies and sensibilities. His work reflects his preoccupation with effecting an aesthetic reconciliation between a Wester abstract sensibility and a uniquely Chinese form of calligraphic mark-making, through a visual language of gestural, lyrical abstraction. As Canberra Times art critic Professor Sasha Grishin wrote, ‘Kuo is very conscious of a distinction between Chinese and Western modes of visualisation….His delicately balanced non figurative designs have an ease, elegance and breathing freedom which can be associated with traditional Chinese calligraphy, yet are firmly located within the tradition of western Abstract Expressionism.’