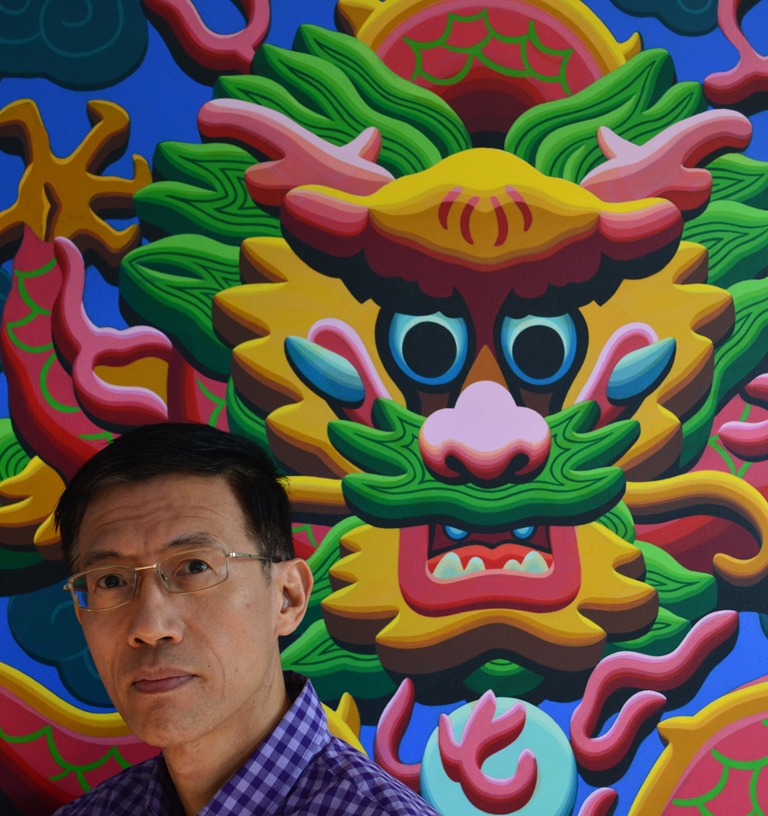 Chinese Australian artist Dr Fan Dongwang studied traditional Chinese art at Shanghai School of Arts and Crafts (SSAC) in 70’s and later became an art teacher at SSAC. As an established Shanghai artist, his work exhibited regularly in Shanghai Art Gallery since 1982, including 1986 Shanghai Art Museum Inaugural Art Exhibition, 1987 Shanghai International Art Festival. As a member of the top professional body Chinese Artists Association he was awarded the Prize for Excellent Work for Shanghai International Culture Exchange. In 1990 Fan migrated to Australia as an artist of ‘Distinguished Talent’. Fan studied Master of Arts at COFA, NSW University in 1995, and received Post Graduate Award and completed Doctor of Creative Art at Wollongong University in 1999. His doctoral theses Shifting Perspectives and the Body established a theoretical model for comparing the differences between the representation of spatial depth in Chinese and European paintings. He was a guest lecturer at ANU, Wollongong University and visiting fellow at Curtin University. His painting was shown in group exhibition at National Gallery of Australia and his solo exhibitions were held at Wollongong City Gallery, Drill Hall Gallery, Sydney University College of the Arts Galleries and Macquarie University Art Gallery. He was awarded Wollongong University Postgraduate Award, Mosman Art Prize, Festival of Fisher’s Ghost Art Award, Liverpool City Art Prize; Willoughby City Art Prize; Ian Potter Cultural Trust Grant; and Art on The Rocks Prize. He was twice the finalist at the Wynne and Sulman Prizes at the AGNSW and the finalist at Moran prize. Recently Fan’s work was featured in China CCTV. Currently lives and works in Sydney.

‘My most recent exhibition Syncretic Visions showcasing large canvas paintings that combine different religions, politics, arts and philosophy to present a shifting perspective and syncretic visual interpretation of contradictory beliefs and the diversity of cultural identities.

I employ a new method of painting which he describes as ‘painting as relief sculpture’, where he produces works in a similar way to traditional Chinese ivory carving – using the brush to ‘carve out’ the paint from the painting’s surface, as if carving a low relief sculpture. This process produces the effect of three-dimensional volume on a two-dimensional surface, a visual illusion that is also expressed in traditional Chinese art.

In Duality, Chinese Australian artist Fan Dongwang’s painting Dragon in Water is a departure from tradition. Here the dragons are aquatic creatures living in water with fluid and hybrid identities, using their wisdom to navigate the terrain of ongoing change. Here the water is the environment, the agent for change. Water dissolves and transforms the old into the new. The traditional Chinese icons are disintegrated and have developed in to a new kind of postmodern dragon: one that is disintegrated and reintegrated. It reflects China today; a mixture of traditional and modern, Eastern and Western cultures. The Dragon has not diminished but re-emerged onto an unprecedented level. The colours are richer and at the same time subtle and the composition has quite complex layers as though the dragon is coming and going into many different realms. In this critical moment the dragon -icon of power and protection acquires a new dual meaning of capitalism and globalization.

On the other side, humble, resilient and iconic, the Australian gum tree has been drowned under roiling floods, consumed in flames, fallen to the buzz of the miller’s saw and slowly choked of thirst. Yet each year it endures. The trees spread back across the land, from scorching deserts to desolate mountains. In the twilight their majestic trunks soar towards the sky in ecstatic salutation, their branches becoming narrow roads winding towards a heavenly and spiritual destination. If one looks closely, they become living things akin to human beings: their solemn trunks dance in the wind, their magnificent bodies transforming into awe inspiring male and female torsos. Gum trees are painterly subjects too, with the strokes breaking free and the colours both subtle and vivid.

These two bodies of works are developed from my knowledge of Chinese relief carving, a unique method of composing 3D images within the narrow dimensions of the carving material to create striking dragons and landscapes. Thus the paintbrush becomes my chisel, ‘carving’ out the trees’ body shape, applying strong upward perspectives to manipulate the canvas surface to create powerful visual illusions. Fan also uses “the art of line” from Chinese calligraphy combined with western Op art colour arrangement to paint the free flowing and gracious dragons and gum tree trunks and branches.

By revitalising old traditions, Fan provides Australians with a fresh perspective of the Chinese culture as well as the Australian landscape. To help Asians and Australians to understand both the cultural differences and the universal experiences embodied in the representation of our identities and environments.

Congratulations to Art Atrium artists Kate Briscoe, Fan Dongwang and Patrick Shirvington for being selected as Finalists in the Paddington Art Prize 2018.