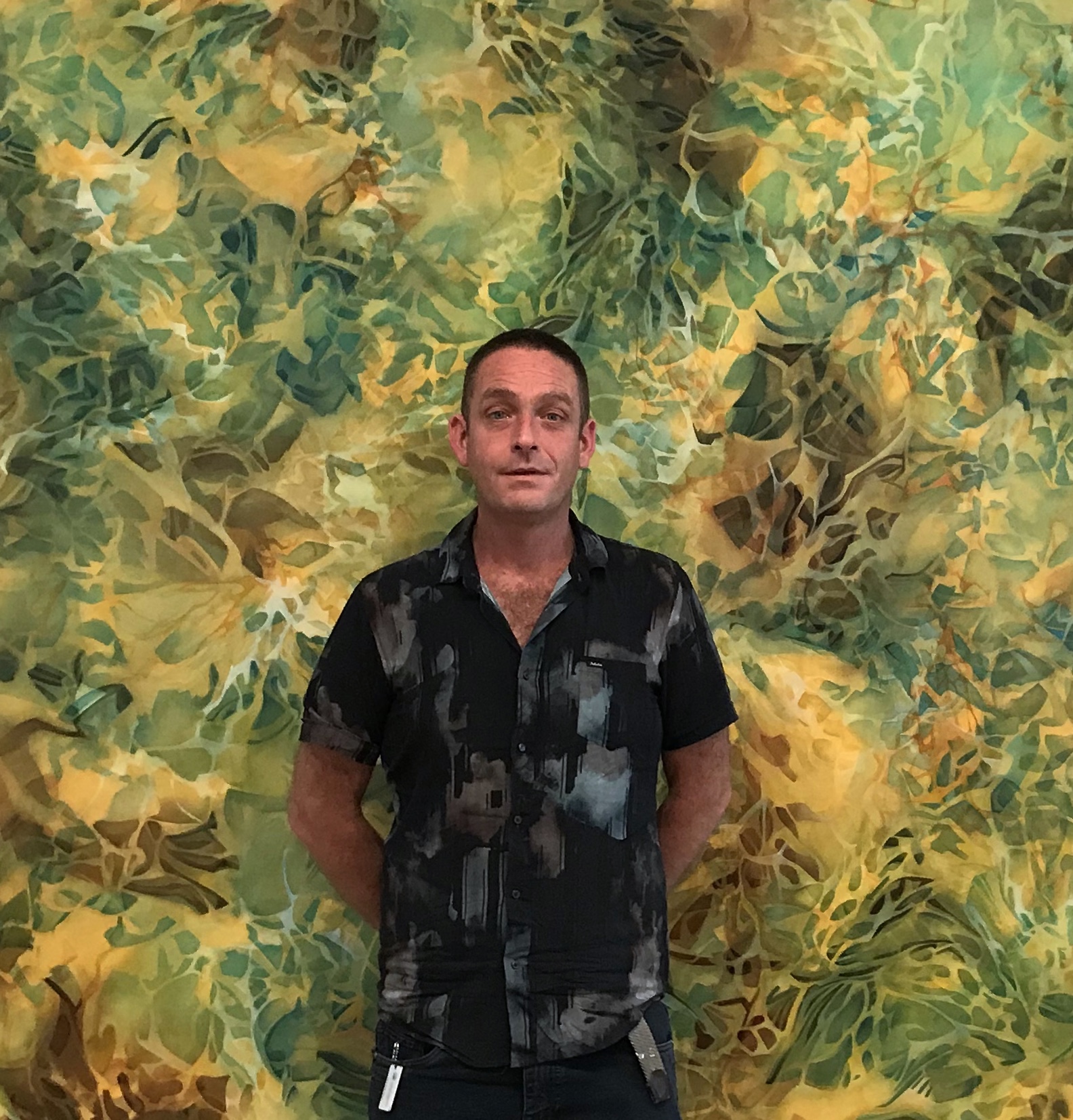 Born in Sydney in 1972, Christopher Connell received a Diploma in Illustration from Billy Blue School of Graphic Design in 1991. He travelled Australia where he showed his work in solo exhibitions in Sydney, Melbourne and Alice Springs; where he spent some time in remote communities in the Central Desert. He then continued his studies at The National Art School, Darlinghurst, Sydney, where in 2013 he received a Bachelor in Fine Arts (Honours), majoring in painting. Connell then went on to complete his Master’s Degree at National Art School in 2019 on a Scholarship from East Sydney Doctors. He is currently based in Sydney and his works are represented in a large number of private collections in Australia, The United States, and Europe. He is also represented in Allen-Linklater’s corporate collection in Sydney, Australia.

‘Primarily my works are intuited meditations, which are conducted by situating myself within the nature of experience of the materiality of paint, and the evolution of form which ensues.
I am interested in what emerges from the complexity of the initial painted marks I make … to seek the painting’s own sense of ‘being’. This is what underpins the primary theory behind my work; ’emergence’, the process of coming into existence.
As such the suite of paintings which make up the Protean body of work focus on both the biomorphic and atmospheric aspects of form; an ode to the complex and fluid nature of evolution and how these developments can be applied to the painted surface when considering the painting as a living thing.
Even though I consider my work to be primarily non-representational, there are references to the familiarity of form and space as a shared platform for all things.

I create work which explores the nature of creation. Specifically I examine how emergent knowledges in the sciences provides new resources for artistic representation; that is, rather than depicting nature in terms of traditional landscapes or formal properties, I rather subject the material of painting itself (colour, paint, formal properties) to new knowledges about how nature itself is formed (from microbiology to ecology and mathematical models of fractal geometry and emergence).Primarily my works are intuited experiences or meditations, which are conducted by situating myself within the nature of experience. A syncopation between painter and viewer occurs during the evolution of my works. Each work is a separate exploration or an isolated evolutionary cycle; each work constitutes the gradual development of a living thing. I subject a given, found natural pattern or form to the dynamics of scale, rhythm and repetition – a sculpting of space as it occurs, a mapping of movement and force on the painted surface.

Even though I consider my work to be primarily non-representational, there are references to the familiarity of space and time as a shared platform for all things. This allows the viewing experience to oscillate between micro and macro scales, ease and disease, fight and play.

I bring no intention for an outcome to each canvas … my job is to allow the works to move, and to pay attention to what is ‘happening’ within the event of each work, to intuit its preferred course, and respond.

I am interested in what emerges from the complexity of the initial painted marks I make … to seek the painting’s own sense of ‘being’ and work toward bringing this forward, or out of the work. This is what underpins the primary theory behind my work; ’emergence’, the process of coming into existence.

The work’s speak of a timelessness or the ongoing and expanding nature of time.

As such, the works do not suppose a beginning or an end, simply the choice of where one may choose to step in or step out of the painting during the experience of viewing. I thus deploy elements from both abstraction and landscape to move past naturalistic representation to rather directly present natural processes in their becoming.’